Back to all posts

The first six weeks of 2020 has been surprisingly active for me as a musician. In early January, I gave a one-hour solo concert at a retirement residence using my loop pedal. At the beginning of February, I was saxophonist in the back up band to a local pop choir. For Valentine's Day, I played classical guitar in a chicken restaurant.
The Valentine's Day work came up suddenly only a week before. I practiced very hard to gather material together to fill three hours. I repeated some stronger pieces in the third set since I figured the diners would be completely different. Now I have a list of material I can refine for the next opportunity.
I entered my latest unreleased single in a national songwriting contest. Once again, I didn't make it out of the first round. Disappointment has become the expected, so I've learned not to get emotionally invested in those kind of things. It didn't take a lot of effort or cost any money, but maybe a few people discovered what I do.
Three gigs in six weeks isn't exactly where I'd like to be, but it is better than most of 2019. I have a couple of Saturdays coming up in March with my looper shows. I've been busy on the home front too, looking after my mom's house and well-being. 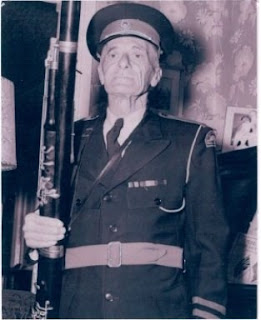 This week, I picked up my grandfather's bassoon from the instrument repair shop. It is a Buffet Crampon and is about 100 years old. I inherited it only last summer. I never knew my grandfather; he died about eight years before I arrived. I wish the instrument came to me when I was younger, but it went to a non-musical side of the family. The repair technician told me he hasn't seen anything like this bassoon. The case was literally falling apart, but the restorer did a fabulous job repairing it with all the original handles and latches. The bassoon sat in a basement for 50 years. Fortunately, the case protected the instrument from damage. I'm going to learn to play it for fun. Instruments need to be played. I thought it would be fun to make a YouTube series of me learning to play it to document my progress. As a saxophonist, the bassoon feels completely alien to me. That will be the first challenge...figuring out how he wore it. In the photo, it looks like he's wearing a strap which I don't have.
It may a while before I get to the bassoon project. I want to start recording my next song, prepare for the March gigs, and do my taxes.